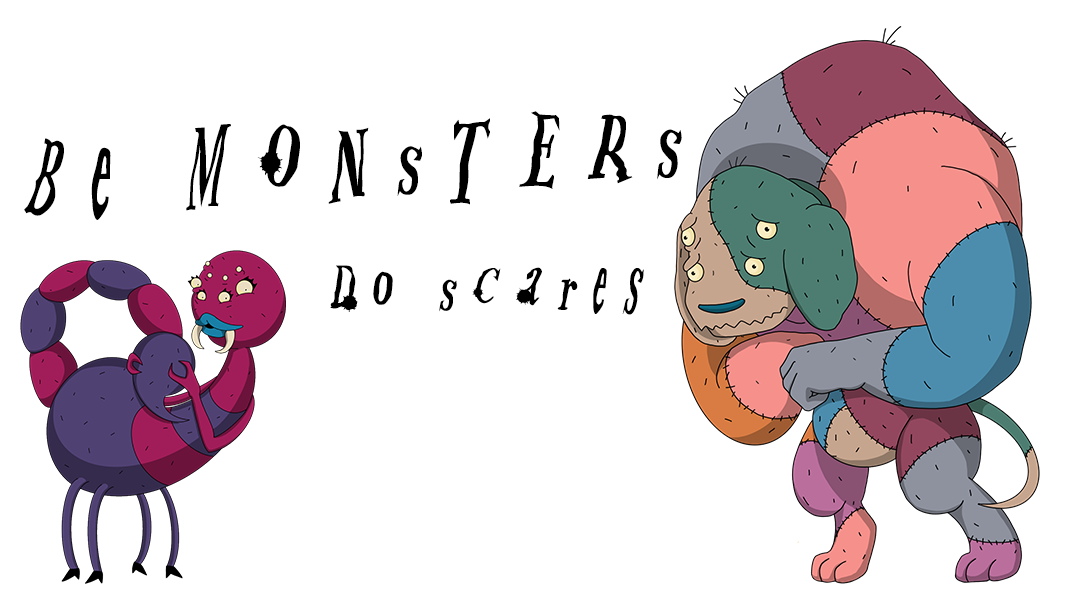 Be monsters, do scares

Scare School is a two-page RPG for as many players as you can get in a room together, inspired by Monsters University and Aaahh!!! Real Monsters.

You are juvenile monsters in training to be Scarers. By day you attend Scare School, and by night you venture aboveground to do your Scarework assignments - tracking down targets, building Fear, and working together to pull off a Final Scare.

Create your monsters, do your Scarework, and try to beat your high score!

Scare School was made possible by the support of my backers on Patreon. Patrons get early access to games, exclusive content not available anywhere else, sneak peaks, and more. When we reach £200 per game in funding, all games released through Patreon will launch with Community Copies. At £300 per game, all Patreon-funded games will be released for free under a Pay What You Want model.

In order to download this game you must purchase it at or above the minimum price of £6 GBP. You will get access to the following files:

Support this game at or above a special price point to receive something exclusive.

If you're suffering financial hardship or marginalisation, or can't afford to buy this game at full price for any reason, feel free to pick up one of the free community copies - no questions asked.

These copies were made possible by the generosity of my patrons on Patreon. Find out more here.

Scare School is a technically-legally-distinct-from-the-source-material Aaaahhhh! Real Monsters! ttrpg. You play as monsters who live beneath a garbage dump and scare the bajeezus out of humans for homework.

The PDF is two pages, with some great custom illustrations and a visual style that perfectly matches the source material.

Character creation is quick and setting up play is easy.

That said, there's...a couple of issues I had with Scare School. I'm not sure everyone will encounter them, but they stood out to me.

The first is that you roll randomly for your starting stats. If this goes poorly and you get an all-1s monster, you're going to have a mathematically difficult time building up any Fear. The game doesn't soft-lock, but it might not feel extremely fun unless everyone pitches in and makes the game about helping you get your scare. Simultaneously, improving your character involves rolling over your stats, so if you got good rolls off of the bat, this can make for some frustrating dead levels.

I think I'd recommend an alternate set-up where you get 14 build points to split between your stats, and you can raise a single stat after each session. I think I'd also drop the threshold for a Major Success to 7+ hits, as there's not a lot of dice manipulation in the game and 7+ is hard to achieve even with the hypothetical maximum pool of 11d8 (using a +2d8 Scare and a Deepest Fear.)

My other issue is that...the gameplay is kind of just bullying? Or at least it'll tend that way unless you take care to set up the humans as deserving it or the scares as being essentially harmless. And even then, the Deepest Fears table has stuff like "drowning" or "the growing weight of their own mortality", and the victim reactions table has "talk to themself, repeating affirmations that it isn't real" and "shake, stutter, and cry."

Doing a little work in advance to build a scenario is probably the best way to avoid this. If you punch up, it'll feel less cruel. Alternately, you can do some world-building and explain why scares are important. This might turn your game into Aaaahhh! Real Monsters Inc.!, but I'm not 100% sure that's a bad thing.

Overall, Scare School is a neat, tight system that does a very good job of evoking the cartoon that it's based off of. It runs quickly, it's easy to wrap up, and I think it'd be an excellent convention game or one-shot. I *do* think you want to pre-cook a scenario or else brief the players on how you want them to play it, since otherwise it has the potential to hit an unfun level of dark, but with some basic precautions I think it'll be a light-hearted, wacky good time. 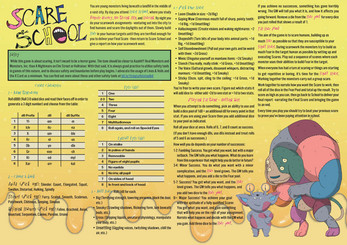