Time will rust the sharpest sword,
Time will consume the strongest cord;
That which molders hemp and steel.
Mortal arm and nerve must feel.

- The Legend of Zelda

Go Alone is a solo journaling RPG played with a deck of cards, a tumbling block tower, and a microphone.

You are a sentient magic sword. You are centuries old and have seen and done terrible things, often in the pursuit of some misguided quest for glory and power. Everyone who has ever wielded you has died, and you have spent more time alone in the dark places of the world than you have spent in the hands of someone who would put you to work.

Alone in the dark for decades, now a new bearer has come. A hero has taken you up, and you have tasked yourself with telling your story and convincing them to retire with you at their side. You may have tried before - you may have tried many times before - but you can’t remember now. You aren’t sure you will succeed, but you have to try before you return to the dirt again.

Go Alone is inspired by Jack Harrison’s Artefact, Jason Morningstar’s The Skeletons, and every magic sword in every game I have ever played. In addition the design was influenced by the music of Spectral Kingdom, Fief, Daniel Deluxe, and the soundtracks to all of the Legend of Zelda games.

Go Alone comes as a 20 page PDF with a printable option ready for assembly into a zine at home, along with a digital download of the original sound written for this game.

In order to download this game you must purchase it at or above the minimum price of £10 GBP. You will get access to the following files:

Support this game at or above a special price point to receive something exclusive.

If you're in need and can't afford a copy of the game, help yourself to a community copy of the digital zine. Every sale contributes more copies to the pool:

Get a print copy of this game here.

I got the print version a while ago and I finally had a chance to play it. I previously played The Wretched and The Sealed Library, so I knew what to expect. The setup is interesting, I love the use of very physical, tactile components (the idea of using tokens that connect to the themes of the game is brilliant - I used small shells for mine). The game - as was likely from the start - ended with the blade shattering. But despite the outcome being all but certain from the start, there's tension and hope, and the journey to that destination is what's interesting. I was very glad that I got to the two cards I was especially looking forward to - the names of the Bearer and the Sword. It came late in the game and I decided that while a wounded sword bearer sought comfort and companionship by sharing his name, the weapon would not reveal its true name, due to his previous choices.

One thing that tripped me up a few times is drawing new cards that asked questions I already answered in previous rounds. I tried answering the questions without elaborating too much, but there are many opportunities for "crossing the streams" which make some late-game questions redundant. For example - questions about the sword's creation or greatest victory may have been explored already in earlier questions about previous bearers or the sword being damaged and repaired.

All in all, I had a great time, I definitely recommend this game and I can't wait to try more Wretched&Alone games this year.

Admittedly, by the time I got to Go Alone, I had been playing Wretched and Alone games for a good little while, so I knew the twists and turns well. However, that impact on my enjoyment of the system did precious little to effect my enjoyment of the game. (Also, I should make clear, I do really like Wretched and Alone as a system!) Go Alone is fantastically written, and I love the angle of playing as a legendary weapon rather than the one who's wielding it, for once. The opening setup in which you design your weapon is left intentionally vague, in such a way that I'd heartily suggest picking up a different game/way to make magic items to fill out what your player character looks and acts like. That being said, once you dive into the prompts, there's plenty of room to tell the story of a sword wielded, sundered, and reforged many times over within. The focus on the toll that the cycle of war and prophecy has taken on the weapon, and how that can lean on the wielder, is a fantastic point to lean on, especially given the tendency for Wretched and Alones to lean dark and heavy. Long story short? If you're curious about how say, Fi from The Legend of Zelda feels by the time of Breath of the Wild, this game could give you some insight!

I'd love to purchase a physical copy of it but money is too short right now. Sadly the community copies are all claimed already but maybe there will some be added in the future? :)
Looks really cool!

I've restocked the community copies, thanks for letting me know

Super cool game! I just purchased a physical copy. Looked through the PDF real quick, and this is definitely right up my alley. I'll post a review (and possibly the whole journal) on my blog after having played through it.

Go Alone is an interesting game. At first I ignored this, but ever since I have an idea for its general setting, bearer, and feel, I actually could not wait to play it.

A thing though: I think that it would be a good idea to let the player choose/create their own weapon and setting. I just want this game to spur different adventures and stories, and even though you could expand upon the prompts provided here, I appreciate it if the choices would be deliberately vague.

Nevertheless, I like this. It is full of potential. 4/5. 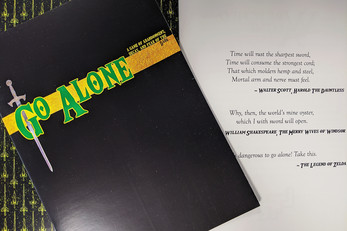 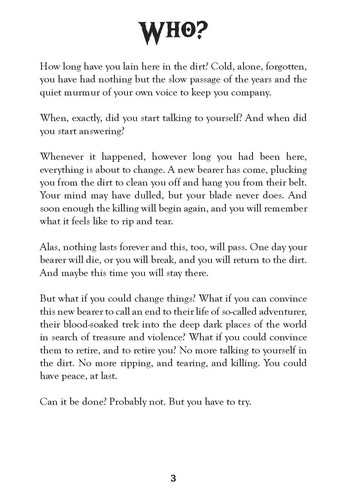 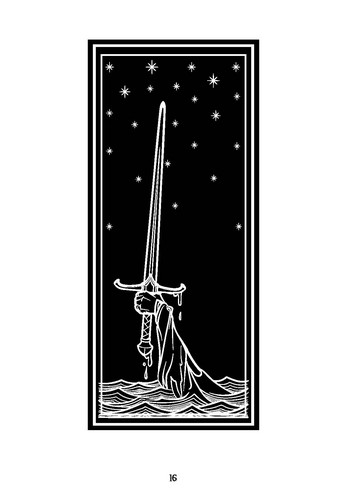